The Peoples History Museum here in Manchester asked me to do a guest blog post abut my activism, protest and the environment. They wanted to hear the voice of a youth activist to tie in with an event they are holding at the museum.

I’m really proud of this blog post because it takes me a long time to get my thoughts down on paper, and I have to keep going over what I have written to make sure it makes sense. And I do get frustrated because sometimes my thoughts run faster than my fingers.

I did an interview whilst at Fridays For Future last Friday about the Peterloo Massacre that happened here in Manchester. It’s the 200th anniversary today, 16th August 2019.

The article and video looks at the politics and protest of then and now.

Today I am now 10. I started being interested in Climate issues when i was 9. I have always loved nature, but it was a geography lesson that snowballed into learning about what is happening to the planet. So a year has passed and still no action. Mum gave me the echoice of what i wanted to do on my birthday and I chose to strike – because the planet is more important than me. 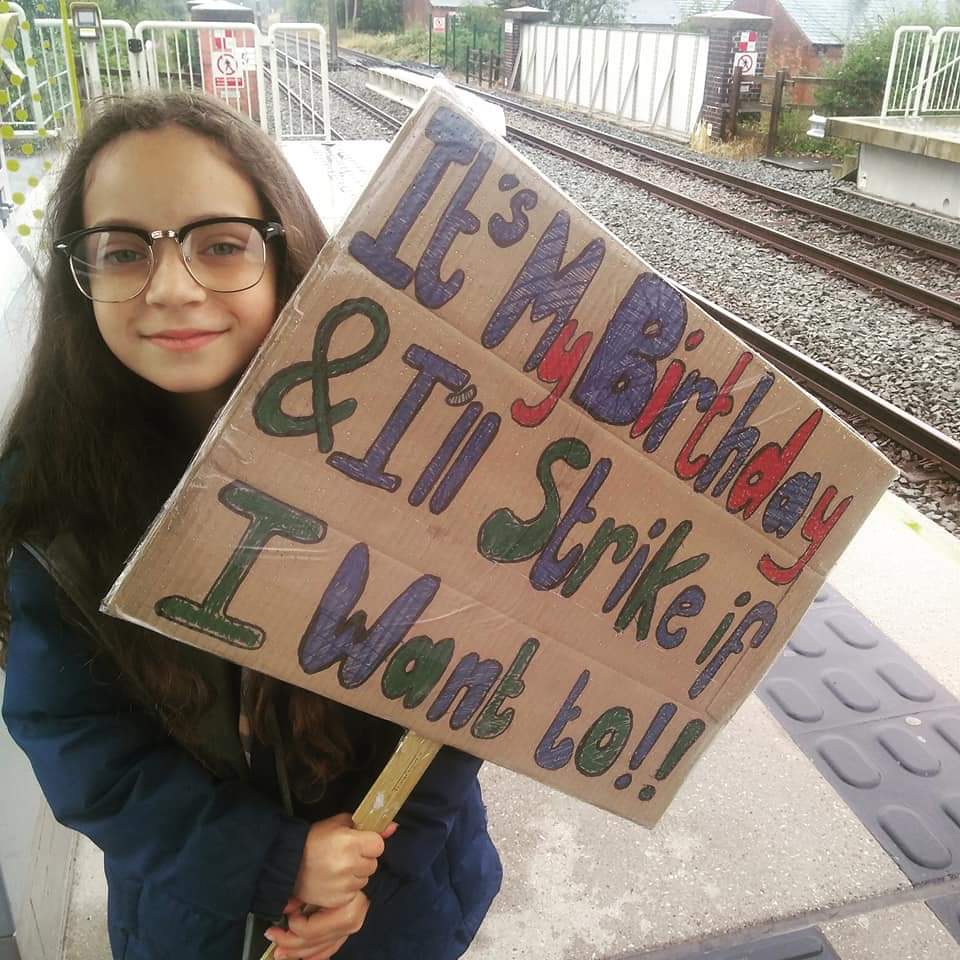 And it rained – all day. Only stopping when we finished our strike – but I finally got to use my protest umbrella.

AT first I was a sad to see how few came to the strike yesterday. Its like each month, less and less people have been turning up, but then i looked around and thought it doesn’t matter. We are here and we care. Others might be busy with school, college and work, so we’ll stand for them. And we were still powerful even though we were small on numbers.

So the rain was so bad it got through the protector and the ink ran on my speech but I did it.

And what was even more special was seeing friends I have made through the strikes and Fridays for future on my birthday!

These guys are all legends!

Speech from today – for those who asked who are hard of hearing:

Hello my name is Lillia and I am 10 years old!

Today is my Birthday!!

Its been nearly 6 months since I joined the Fridays for Future group here in Manchester which means I’ve already spent 5% of my life waiting for those in power to make changes to ensure our future.

I’ve seen the first School Strike here in February, and each of the strikes since. Extinction Rebellion Shut down London. And seen dedicated people each week fighting for all of our futures.

To them I say a massive thank you!!

Especially for giving me hope for the future.

I’ve seen The UK become the first country in the world to declare a Climate Emergency, and then set a date to be carbon neutral that their idea of an emergency is a joke!

Manchester’s Mayor come here and spoke saying he would help us to fight for a better future for us children. And then nothing!! It was just words. It made him look good that was it.

I was there when Manchester declared a climate emergency, and then Bury and Salford also declare one and Oldham declare their version of a Green New Deal.

To them I say stop treating us like we are stupid. Your words do not match your actions.

This is supposed to be an EMERGENCY!!

We have 5 years to stop us from going over the next tipping point.

We need big business and government to put climate breakdown as their top priority.

We need councillors and politicians to do their job – to represent the voice of the people.

We are the People!!

We are that voice!!

Our voices can and WILL make the difference and bring about change. We have to stay strong, Keep shouting! Keep messaging, tweeting! Keep writing your MPs! Keep asking Questions of everything they say and do!

Today I really wanted to just be a kid, open my presents and not have to think about the future which scares me. Instead I’m here with you having to fight and worrying about the problems that lie ahead of us.

Thank you for standing beside me! For making me feel a little more hopeful!

To those in power – in case you don’t know what an emergency means I looked it up for you.
An Emergency: a serious, unexpected, and often dangerous situation requiring immediate action.

Stop putting greed and money before all of our lives and Act!!

There was an error retrieving images from Instagram. An attempt will be remade in a few minutes.

My Tweets
Create your website at WordPress.com
Get started